Posted on July 22, 2015 by Stan Jester | Comments Off on Charter School Showdown – Part I

Charter School Showdown Between DeKalb Schools and the State DOE 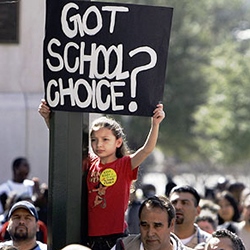 It seems that the established bureaucracy in DeKalb does not appreciate, or respect, the new rules and guidance from the State Department of Education (DOE), regarding charter school autonomy.  A showdown may be brewing between the State DOE and DeKalb unless the new Superintendent makes a course correction.  The new Superintendent has inherited a central office staff that is refusing to give up control of conversion charters despite the law and pleas from the state and local communities.
Several issues are at risk if the DeKalb bureaucracy doesn’t modify its position regarding control and resource allocation of schools.  DeKalb’s petition to become a “Charter System” is at risk of denial because the district is failing to demonstrate how it will guarantee autonomy for all its charter schools.  If DeKalb’s petition is denied, the system will be labeled a “Status Quo” system.  While granting autonomy appears to give the central office heartburn, becoming a “Status Quo” system creates another set of problems the bureaucracy may find equally unpalatable.   Under that scenario, the district loses its waivers.  This means that DeKalb must comply with classroom size mandates which are much lower than the current class sizes in DeKalb.  The budget must show that 65% is spent in the classroom; a mark that DeKalb has never met since the law was passed.  There are other mandates that won’t get waived but class size and budget requirements will have the biggest impact on operations.
The choice for the bureaucrats seems to mean giving up control over high functioning conversion charters and demonstrating how they will respect and protect real autonomy for them; or lose waivers that will result in the need to make massive changes and budget allocations that will drastically shrink classroom size in every classroom and adjust the budget to spend a minimum of 65% on the classroom.
Stay tuned for Part II – Chronicling the law, policies, memos and emails between DeKalb Schools and the Ga Department of Education.

This entry was posted in Board Policy, Charter Schools. Bookmark the permalink.