Fulton County Schools Districtwide Educational Space Standards
Recommended Spaces for a high school with an 1,850 FTE capacity:
Page 24 – Music: Orchestra, Music Technology, Band, Chorus, Marching Band: High school band room needs to hold up to 200 students plus many large instruments.
Page 26 – Athletics – Participation in athletic activities have shown to have numerous positive impacts on student achievement, discipline, attendance, and overall productivity of the students. In order to support these athletic endeavors, the District must provide a variety of facilities.
Page 48 – Physical Education Spaces In addition to the standard gymnasium with raised track and 2,000 seat bleachers, a high school with a capacity of 1,850 will also need an auxiliary gymnasium with 375 seat bleachers.

MY CONCERNS
DeKalb Schools plans on constructing a 750-seat, 38-classroom, two-story addition to Lakeside High School extending the current footprint and bringing the new capacity to 2,500 seats. Chamblee Charter High School will be getting 600 seats bringing capacity 2,410 and adding 600 seats to Dunwoody High School bringing capacity there to 2,100.
None of the spaces recommended by the Fulton Schools Educational Space Standards are budgeted with these expansions.

Lakeside HS Council
Not A Fan of the Building Additions
January 24, 2018 – To balance out the racial diversity and socio-economics of the student populations attending Lakeside HS as well as evenly distribute the students from the lengthy Buford Hwy Corridor, the E-SPLOST V Project List includes a 750-seat, 38-classroom, two-story addition to Lakeside High School (LHS).

Is 600 More Seats At Chamblee Charter HS A Good Idea?
January 17, 2017 – Please help me understand why adding 600 seats to Chamblee Charter High School is good for anybody in that community? I suspect that any support is driven by redistricting.

Pros and Cons of adding 600 seats to Dunwoody HS
January 7, 2017 – Moving forward, I’m trying to understand the support for the building addition at Dunwoody High School. The speculation that some Dunwoody residents would be redistricted out of DHS seems to be the only reason for any continued support of the building additions.

Lakeside HS Council Not A Fan of the Building Additions

To balance out the racial diversity and socio-economics of the student populations attending Lakeside HS as well as evenly distribute the students from the lengthy Buford Hwy Corridor, the E-SPLOST V Project List includes a 750-seat, 38-classroom, two-story addition to Lakeside High School (LHS).
No consideration appears to be given to the students and taxpaying communities along the Briarcliff Corridor regarding the impact on their educational experience (cramped common spaces and lack of facilities, etc.) or quality of life (traffic, flooding, etc.). There is also possibly a Title IX claim given the lack of adequate sport facilities for girls.
If common spaces are not addressed, LHS will end up with more seats but little in the way of common space improvements for the students they already have, let alone the additional seats. The original conceptual plans include

It is important to point out that the improvements listed above are the bare minimum requirements necessary to get state approval for the addition. Many school districts go beyond the minimum requirements when building facilities for the students in their communities. That information is forthcoming in upcoming posts.
The LHS building additions will not include any renovations or additions to existing media rooms, art rooms, hallways, gymnasium, locker rooms, fields (not including softball field relocation), or any other core spaces or surrounding infrastructure. 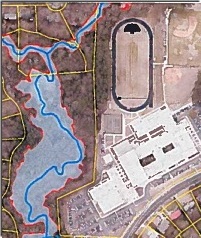 Anybody that has driven on Briarcliff Rd when it’s raining is well aware of the watershed issues in the area. LHS is built on the edge of a flood plain. As a matter of fact, the conceptual designs relocate the softball field right on top of a stream in the middle of said floodplain.

Lakeside School Council Concerns with LHS Expansion Plans
The Lakeside HS Council is voicing serious concerns about the planned expansion. They have noticed the same things I have noticed in Chamblee and Dunwoody cluster, that support for these expansions is solely based on the fear of redistricting.
Mike San Fratello, LHS council chair, sent the following open letter this month to the DeKalb Schools administration and Board of Education.

Dear Dr. Green, Dr. Johnson, and members of the Board of Education.
During our November LHS School Council meeting, we had members of the Lakeside community come to voice serious concerns about the planned expansion to Lakeside High School. During our December meeting, we finalized our position on how we can properly represent the state of community consensus, and key concerns regarding the concerns about how education will be affected by these plans.
We all know efforts were made to get community input regarding prospective plans to address the growing student population. It’s clear that neighborhoods that feared being redistricted out of the Lakeside Cluster were most vocal and active in providing feedback. Many, if not most neighborhoods in the community seem to have very little understanding of current plans. At a minimum, this means we represent a community with conflicting interests and desires.
The position of the Lakeside School Council is as follows:
The road infrastructure surrounding the school cannot support additional traffic.
• With the current enrollment of over 2,200 students, we have actually been conducting a feasibility study of traffic issues already.
• As roads cannot be expanded around the school, it is clear that traffic congestion has already reached a critical point.
• The expansion plans will only exacerbate current conditions, increasing concerns with public safety and the ability of emergency vehicles to respond in a timely manner.
• School buses routinely arrive late, delivering students past the beginning of class/home room. This also means that these buses will be late for middle school pickup, thus affecting student arrival times at Henderson Middle and other schools.
• The key question is not about adding 300 more students to Lakeside’s current enrollment, but what an optimal number of students is for this location given the property size and road infrastructure. Given the experience during the 2017/18 school year so far, it would seem that number is LESS than 2,200, not more.
Questions exist about how additional hard space resulting from construction will affect the watershed management in the area.
• Already, flooding from rain at the corner of Briarcliff and Briarlake Roads happens often when it rains, further affecting traffic congestion.
• Either the county or the Army Corps of Engineers needs to review this issue to assess the impact water runoff around the school.
There appears to be a lack of a strategic plan to address enrollment requirements over a period of longer than the next few years. A worst case scenario means that the Lakeside community will be in the same position it is now, once the proposed expansion is completed.
Last, all decisions about moving forward with the expansion plans must be made in the context of how they will deliver the highest quality education experience possible to each and every student.
• We understand efforts were made to get community feedback regarding options the board was considering. It’s clear our community has conflicting views.
• Even if the entire community was in support of expanding LHS per existing plans, we would still need to look to the education experts to determine what the optimal course of action is.
• Our deepest concern is that the current plan is not the best approach to deliver the best educational experience possible.
Thank you for your attention in this matter.
Mike San Fratello
Chairman, Lakeside High School School Council

Adding Classrooms is Only Part of the Soluion
November 8, 2017 – Angela Maki is an involved member of the community with children attending the Lakeside cluster. On Monday she relayed to the board of education that classrooms alone are an inadequate solution to overcrowding. She wants to know what the school district is going to do about expanding PE facilities, locker rooms and office space, etc …

Concerns about Lakeside HS Expansion
November 4, 2017 – Various residents and civic associations have caught wind of the 750 seat expansion project and are doing the research the school district should have done in the first place. After doing some of their own research, they wrote a letter to county and school leadership voicing their concerns.