While DeKalb Schools is seeing record revenues, they are depleting the fund balance (reserves) and balancing the budget on the backs of teachers. 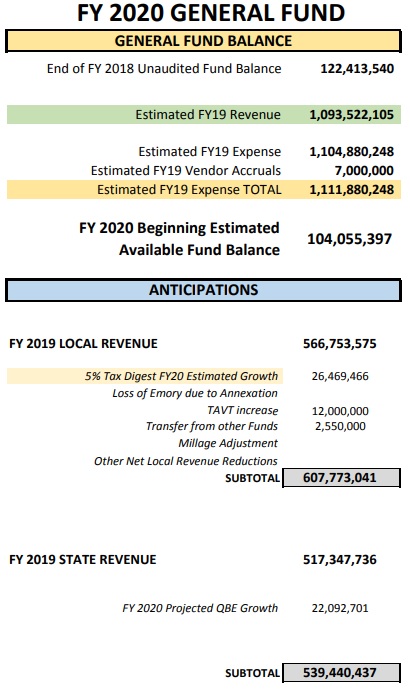 Once again, next year we expect to deplete our reserves further. DeKalb Schools expects reserves at the end of FY2020 to drain down another $14 million to $89 million.

The story is, while revenue is up at all time highs, we are spending millions more than we are taking in. The school district has a significant structural deficit. But this spending is not benefiting teachers in the classroom, as they will not be getting the $3,000 raise that the Governor included in the increased QBE funding.

With future legal liabilities looming and the inevitable economic ebb, our proclivity for having structural deficits in the best of times, is disturbing. It puts us on a collision course for calamity.

Let’s do the numbers

On Feb 13, 2019 the board approved the January 7th salary steps (E scales for teachers), as well as revised Z, G, N, and LT Salary Steps. The annual cost is $40 million. It was implemented in January, so it only cost the school district $20 million in the FY2019 budget.

Classified staff salary adjustments are not finalized yet. Also, teachers will be stepping this year (only appropriating half of that). It is estimated those costs to be another $10 million. The Governor’s $3,000 including benefits is estimated to be a $22 million bump.

TRS FUND – CONTRIBUTION ADJUSTMENTS
The school district has been in contact with the state and they are comfortable that the TRS Fund contributions are set for this year.

This entry was posted in Budget. Bookmark the permalink.