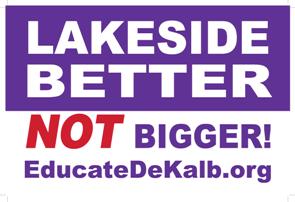 Can anybody tell me how adding 750 seats and squeezing 2,400 students like sardines into Lakeside High School will be good for anybody in that community?

The opposition to the building additions has been gaining momentum.

EducateDeKalb.org has initiated a campaign to make “Lakeside Better Not Bigger”. In their own words …

Overcrowding at Lakeside High School (LHS) has become a crisis. As part of a larger overcrowding problem in its northern areas, the DeKalb County School District (DCSD) Board of Education (BOE) has approved physical plant expansions to 3 high schools in those areas (of which one is LHS) in order to increase the student population at each school. Based on continued growth in the area and DCSD predicted enrollment, this expansion would not solve current overcrowding problems.

LHS was built in the 1960’s and expanded in 2012 to accommodate 1,796 students (SPLOST III). As of October 2017 LHS enrollment was 2,165 and growing. The $26M planned expansion will add 750 seats to the LHS campus, bringing its capacity to 2,500+ students with projected enrollment of 2,600+. For many reasons, we believe this “approved solution” will potentially damage the LHS student experience, academic achievement, and extracurricular activities, as well as the surrounding neighborhoods.

LHS has a strong heritage of academic excellence, but over the past 10 years its performance trajectory has steadily declined. The DeKalb County Board of Commissioners are urging the DCSD to halt this LHS expansion and develop a comprehensive, informed strategic plan for the whole district before building or expanding any existing facilities. We believe a better plan would more effectively include building a new high school and reducing the LHS student population to 1,796, which it was expanded to accommodate in 2012.

12 Reasons Lakeside High School Should Be BETTER, not Bigger

Is 600 More Seats At Chamblee Charter HS A Good Idea?
January 17, 2017 – Please help me understand why adding 600 seats to Chamblee Charter High School is good for anybody in that community? I suspect that any support is driven by redistricting.

Pros and Cons of adding 600 seats to Dunwoody HS
January 7, 2017 – Moving forward, I’m trying to understand the support for the building addition at Dunwoody High School. The speculation that some Dunwoody residents would be redistricted out of DHS seems to be the only reason for any continued support of the building additions.

This entry was posted in Facilities Feasibility Study. Bookmark the permalink.