Another Cover Up in Dunwoody

As discussed in yesterday’s post, Enforcing Zoning, Building, and Other Ordinances, DeKalb Schools’ Chief Legal Officer says, “GDOE guidelines provide that temporary educational facilities must meet all applicable state and local building codes and must have a separate certificate of occupancy for each building.”
Unfortunately, hundreds of students across the county are currently sitting in non-inspected trailers. The City of Dunwoody can’t provide a Certificate of Occupancy (CO) for most of the portable classrooms currently in Dunwoody.
Cities need to enforce their ordinances/code, regarding building, plumbing, electrical, land disturbance, storm water, etc. for any building activity on property owned by the school district or county, within the city. The court explicitly stated, in City of Decatur vs. DeKalb County, that within a city, only the city is imbued with the powers to enforce such things. 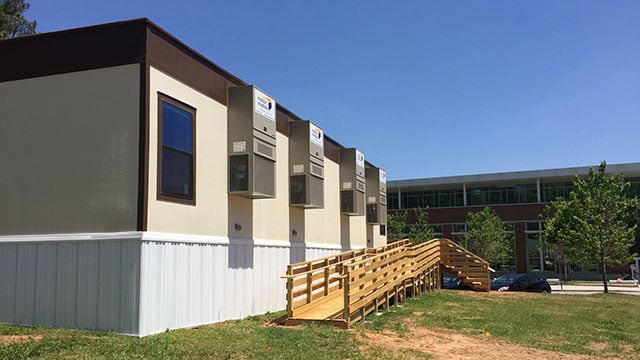 Portable classrooms in Dunwoody not inspected

Robert Miller began looking into the overcrowding issue a decade ago when his children were forced to learn in trailers. He was interviewed by CBS 46 in the news story “Portable classrooms in Dunwoody not inspected”
“We don’t know how old the trailers are, we don’t know where they came from,” Miller said. “When you look at the city of Dunwoody code, they don’t even allow temporary trailers. You can only have temporary trailers connected to a building permit.”
With his permission, I’m reposting some thoughts Robert Miller recently shared on Facebook.

Another cover up in Dunwoody! The School Administration quietly cut down specimen trees and quietly installed non-permitted trailers, while the City Staff quietly sat by and watched because they only permit, inspect and fine if they can collect money. Now they are both quietly having meetings to work out a cooperative deal!
Have you been warned, threatened or fined by the City? Did you get to have a beneficial meeting with the city and work out a deal?
If the City was committed to protecting the citizens then they would equally and fairly enforce city ordnances with all partners, businesses and other governments. Not just the ones that pay for permits and fines!
The Dekalb County School administration is not following the State requirement of getting a certificate of occupancy for trailers used as classrooms. And the City of Dunwoody staff is not enforcing the city’s temporary trailer and tree ordnances. Is the city staff lazy or do they only enforce life safety issues when they get paid?
The Mayor and city council’s job is to establish the code AND hold the staff accountable for enforcing the code.
I am sick of the incompetence!
School Administrators DO YOUR JOB!
School Board HOLD THEM ACCOUNTABLE!
City Staff DO YOUR JOB!
Mayor and Council HOLD THEM ACCOUNTABLE!

Open Letter to Mayor, Council Members, and City of Dunwoody staff – Enforcement of city ordinances/code
April 12, 2017 – I am writing to address a concern I have regarding recent correspondence about the city’s process for permitting and inspections for compliance with city ordinances; specifically as they relate to other governmental entities operating within the city’s boundaries.

This entry was posted in Dunwoody High School, Trailers and tagged Certificate of Occupancy, City of Dunwoody, Inspections. Bookmark the permalink.

3 responses to “Another Cover Up in Dunwoody”