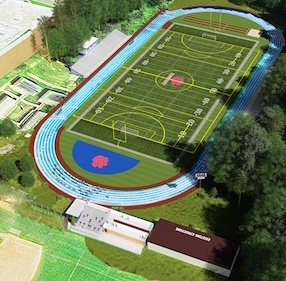 “Game On” is a campaign by the Dunwoody High School Parent Teacher Student Organization (PTSO), School Council, and Community Association, to originally raise $2 million for capital improvements to the DHS athletic facilities including

Coordination with DCSD
E-SPLOST V  projects for Dunwoody High School include a 600 seat classroom addition, artificial turf installation and covering the retention pond/swamp.  In March, the Board received and approved the administration’s plan for the timing of all E-SPLOST V projects. I voted against accepting this timeline but it was passed on a 5-2 vote. The projects at DHS aren’t scheduled to begin planning and procurement until February of 2019. Construction isn’t scheduled to begin until October 2020. The expected completion date is between June and September 2022 (at the earliest).
The Game On Capital Campaign would like to decouple the athletic facility improvements from the E-SPLOST projects. The Capital Campaign would like to accelerate the schedule of the athletic field improvement component of E-SPLOST V. The district said they will investigate the feasibility of accommodating this accelerated schedule as they proceed with overall planning and design work.
Investigation of Accelerated Schedule
The school district must consider how at least 2 key variables will affect all of the E-SPLOST projects at DHS, not just the athletic field improvements. Those variables are the location of a sufficient water retention pond and the location of the 600 seat addition.
DCSD has indicated their intention is to put out RFPs, make awards, and then begin each E-SPLOST V project according to the approved scheduling plan. Once the awards have been made, the school district will understand how the key variables for DHS addition and improvements interplay. At that point they will know if the current retention pond location will be sufficient for the site or if another retention area must be created and placed under the athletic fields.
If the current retention infrastructure is sufficient and if the building addition doesn’t require the reconfiguration of the athletic fields, then it is more likely DCSD can decouple the athletic field improvements from the overall project. If that happens then the Game On Capital Campaign can move sooner to accomplish its goals.
If another retention pond must be constructed or if the building addition will impede on the current athletic field areas, the Game On Capital Campaign may face a delay in starting their projects.
The RFPs have not yet been released by the school district. This is still several months out. Once they go out, it will take some time to gather the responses and determine the award. From that point, it will likely take another year to perform preliminary designs and conduct a feasibility study to determine the impact of the addition and field work. Based on the data and feedback from the school district, and if the athletic field improvements are able to be decoupled from the whole project, the best case scenario is that the capital field improvements breaks ground the Summer of 2019.
What is a matching fund?
The Dunwoody School Council and school administration have been told by DCSD that the district would match any funds the community raised. One of the items included in E-SPLOST V’s project list is an upgrade to artificial turf fields for all of the high schools. The budget for field improvements is the same for all high schools. Regardless of the amount of money Dunwoody raised, the school district has budgeted the same for Dunwoody.