The developers of the Doraville GM Plant site are calling the live, work and play community “Assembly”. They are seeking a Tax Allocation District (TAD) from the city, county and school district. The TAD was overwhelmingly approved by the city and county but came to a screeching halt with the school district.
Melvin Johnson, the school board chair, inquired into the desire of each board member to have a TAD presentation.  A majority of the board declined coming together to learn more about the TAD.
Recently, a petition was started asking the DeKalb County School Board to Hear the TAD Proposal.
From talking to AJC reporters, DeKalb citizens and listening to public comment, there are a number of questions that need to be answered about the TAD and the Assembly project. I write this blog to open the dialogue.
Luke Howe, the Economic Development Director for the City of Doraville, answers my questions about the TAD and the Assembly project. 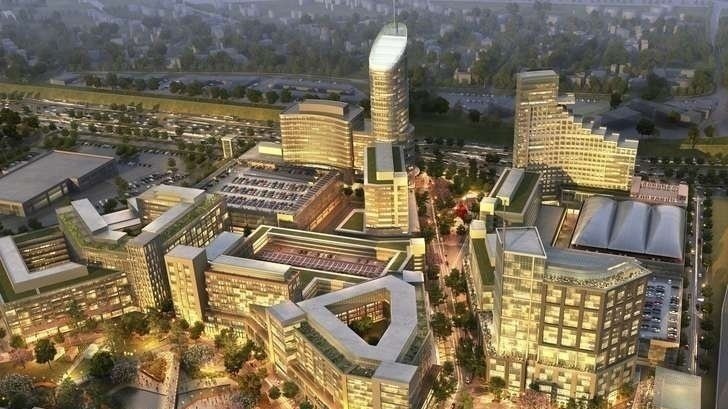 Question: Why do you need a TAD? What kind of improvements can be paid for by the TAD?
Luke Howe (City of Doraville Economic Development Director): A TAD is needed to fund large scale critical infrastructure at the front end of the project. The items that can be paid for by a TAD include public owned infrastructure, including ~ 23,000 feet of roads, corresponding sidewalks, lighting and landscaping on both sides of the streets, and ~ 10,000 feet of sewer and water lines.
The most critical improvement is the covered street that connects the site to the Doraville MARTA Station, a Public Central Park, trail and a bike path that connects to the surrounding neighborhood. The covered street is expected to cost about $50,000,000 and is the item which will have the greatest impact in drawing large corporations who are demanding transit connections for their employees.
Question: The Kensington and Briarcliff TADs have decreased in tax digest value since their inception with Kensington showing a decrease in excess of 20 percent. If the same thing happened to the GM Plant site, how would that affect the Assembly TAD?
Answer From Luke Howe:  The Briarcliff, Kensington and Beltline TADs are not appropriate comparable sites to Assembly. Those are “Area TADs” that have neither specific projects driving the needs or a private partner who has made significant investment within the TAD boundary. If for some reason the Assembly TAD value decreases by “20 percent” the bond purchasers would be the only people affected. The taxpayers will have the public improvements funded by the bonds.
Question: The Beltline TAD spelled out how much money APS was going to receive. There were millions of dollars the city couldn’t pay APS. Why shouldn’t we expect the same thing from this TAD?
Answer From Luke Howe: The Beltline, the “build and they will come TAD,” is also an Area TAD. Additionally, it’s the first to use TAD bonds to take property off the tax rolls to build a trail with the expectation that the trail will spur collateral growth. Think about that. They eliminated their base increment when they bought private property for the trail. That, of course, created the need for a complex payment agreement to make up for the base loss. It was bold and ambitious, but it was inherently risky and speculative in nature.
Unlike those examples, the GM TAD is a Project TAD most similar to Atlantic Station. In these cases, a willing developer has secured the property and is driving the need. These are much less speculative because the development team has a plan. We know exactly what they plan to build and what their project will generate in terms of revenue. If the development scope or pace falls short, the amount of each specific bond issue will be correspondingly lower but, under no circumstances, will that result in any financial exposure to any of the public entities. The three public entities (i.e. the City, County and School Board) need to execute a well thought out agreement between them that reflects their negotiations.
Question: Are there any examples of any successful TADS in the metro Atlanta area?
Answer From Luke Howe: Many – Atlantic Station, Camp Creek, the Atlanta Westside and Eastside TADs have all spurred growth, increased the tax digest, and generated and/or increased sales tax revenue, personal property tax and other taxes.
Question: If the Assembly TAD doesn’t happen, will the Assembly project seek tax abatement from the Doraville Development Authority?
Answer From Luke Howe: If the Doraville TAD is not fully supported, The Assembly team will, in partnership with The City of Doraville and DeKalb County, pursue alternative financing for the public improvements.
Question: Atlantic Station received millions in grant money. How much grant money has the Assembly project received for redevelopment?
Answer From Luke Howe: If The City of Doraville/ DeKalb County/ MARTA are successful in attracting grant funding, it directly reduces how many TAD dollars are needed to fund public infrastructure. That would then allow the TAD funding to be paid off earlier and enable the public entities to receive the new tax revenues sooner. Like Atlantic Station, grants will be pursued by the City led coalition to reduce the local funding of the public infrastructure.
The City has several applications pending. But keep in mind grants have to be matched with local money in most cases. We’re applying for a $50 million USDOT TIGER Grant. The minimum 20% match is $10 million. We need $13 million to be competitive.
Question: It was determined that 59 GM sites were contaminated with hazardous waste. Why would this brownfield site be any different?
Answer From Luke Howe: GM did a good job of addressing hazardous conditions as they were identified. Despite their efforts, the old buildings (now demolished) contained some asbestos and lead that was remediated in advance of demolition.
Brownfield designation does not mean a site is contaminated but it does provide a mechanism for cleanup just in case something undetected is discovered during construction. The Brownfield Program provides a protocol for notification, addressing, and reporting.
Question: What studies have been done on the environmental condition of the site?
Answer From Luke Howe: Assembly has undergone extensive testing for environmental contamination including nearly two hundred exploratory borings. In addition to the testing, historical research was performed dating back to the beginning of the plant in the 1940’s. Both history and testing provided detail on the locations and makeup of soil that may need to be remediated.
Question: What is the current environmental condition of the site?
Answer From Luke Howe: Since the buildings that contained the majority of contaminants have been demolished and all of the building slabs and foundations remain in place, the former GM site is currently cleaner than it has been in over 50 years. If any additional contaminants are discovered, they will be cleaned in accordance with the Brownfield Program as regulated by the State of Georgia Environmental Protection Division (EPD)

So, it would seem that the question isn’t TAD or No TAD. The choice is between TAD or abatement. What are your thoughts?

Superintendent: DeKalb Schools won’t be part of Doraville TAD
By Marlon A. Walker – The Atlanta Journal-Constitution
Jan 10, 2016 – Superintendent Steve Green said DeKalb County Schools would not contribute financially to what could be one of Atlanta’s most significant mixed-use developments since Atlantic Station, saying he would not gamble with millions in tax dollars meant to educate children.

Doraville Tax Allocation District
By Commissioner Nancy Jester
Dec 22, 2015 – Every dime of property taxes for this property must be paid. The TAD does not change that. The business community and investors have expressed their concerns about DeKalb’s business climate. The GM site redevelopment is one of the largest projects in the Southeast. Successfully redeveloping this area will improve DeKalb’s reputation, bring thousands of jobs to the area, and improve land value; resulting in a larger commercial tax base for everyone.

DeKalb Schools – Not a Fan of the TAD
By Superintendent Stephen Green
Dec 16, 2015 – I have several serious reservations about committing school resources over the course of the 25 years of the TAD for this project.

Bob Kelley (Apr 29, 2016) – I strongly believe that this is very important to our community and our county. From what I’ve read, the school board could certainly use the extra revenue. I respect Egbert Perry and his reputation and know that he will deliver a quality finished project!

Shelby Triick (Apr 29, 2016) – This development is vital to our area and will be a catalyst for improvements throughout

Katerina Taylor (Apr 23, 2016) – The future of DeKalb is on the line and if we don’t take action now, the citizens of this county will experience the adverse impact of our unwillingness to make the right decisions around infrastructure, economic development, and future development of people in the county

Robert Hope (Apr 23, 2016) – There is no logical reason for the school board to refuse to allow anyone investing $66 million in our county to present his proposal to the board. Not doing so is simply rude and not the way to encourage anyone to want to do business in DeKalb.