During the week of July 20, 2015, the DeKalb County School District distributed merit pay from a federal program, Race to the Top, to 1,830 teachers, who were identified as the top 20 percent of teachers in 2014-2015 school year using the newly calculated Teacher Effectiveness Measure (TEM) from the Georgia Department of Education (GDOE).
Tier 1 – $2,500 was awarded to the top 10 percent of teachers
Tier 2 – $869.75 was awarded to the next 10 percent of teachers.
Note:  The merit pay awards were distributed according to the district’s approved merit pay plan. However, the merit pay awards may have exceeded the top 20% since many teachers had the same TEM score and could not be ex-cluded if that TEM score in the top 20% qualified for merit pay. There were numerous teachers with the same TEM score which resulted in the district awarding beyond 20% of the teachers in the district (Approximately 29%).
Teachers eligible for merit pay were identified as active employees at the time of the merit pay distribution, were employed by DCSD in SY2013-2014 and SY2014-2015, had student growth data in SY2013-2014 or earned a Level IV or Exemplary on Teacher Assessment of Performance Standards (TAPS) for SY2014-2015 if they had no student growth data in SY2013-2014.
TEM Score
The TEM score consists of a TAPS score and the Student Growth Score as calculated by the GDOE.
TAPS Score
Teachers earned the TAPS score which is the SY2014-2015 annual evaluation by the teacher’s principal outcome they received in April or May. A TAPS rating of 1-4 is earned as follows:
Level 1 – TAPS score of 0-6
Level 2 – TAPS score of 7-16
Level 3 – TAPS score of 17-26
Level 4 – TAPS score of 27-30
Student Growth Score
The Student Growth Rating was calculated by the GDOE using student data from the SY2013-2014. The student growth score assigns a teacher a score of 1-4 depending on the outcome of their student data analysis as follows: 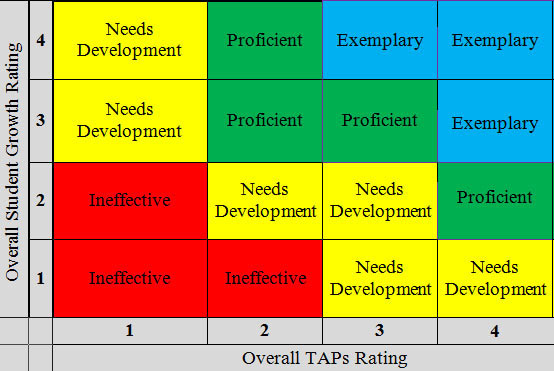 This entry was posted in Teachers. Bookmark the permalink.