26 of the 139 perpetually failing schools in Georgia are in DeKalb County.
Todd Rehm is a political consultant and editor of GaPundit.com, the most-read political newsletter in Georgia. His Georgia Politics, Campaigns, and Elections for April 22, 2015 included this article today.
Bill Signing
Yesterday, Governor Nathan Deal signed a pair of bills to improve education across the state and to ease governmental burdens on new Charter Schools.
First up was the Opportunity School District legislation, Senate Bill 133, 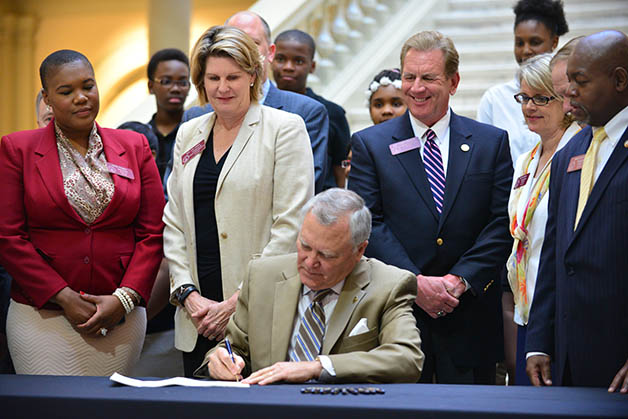 From a press release by Gov. Deal’s office,

“By signing the Opportunity School District bill, we are promising better days ahead for students trapped in failing schools,” Deal said. “The power of positive change now rests in the hands of Georgia’s voters, and I know they share my belief that every child can learn and should have access to a high-quality education that prepares them for the workforce or for college.
“There are currently 139 schools across Georgia that have received a failing grade from the state accountability system for at least three consecutive years. Too few of these students go on to higher education, too few attain job skills and too few get a high school diploma. Too often this leads to a life that never fulfills its potential. With this new system, we can and will do better.”
The OSD legislation requires a constitutional amendment to be enacted. The General Assembly passed the constitutional amendment resolution and the implementing legislation during the 2015 legislative session. It now requires a majority approval by Georgia voters in the 2016 general election.
Deal also signed HB 372, the Utopian Academy for the Arts Act. The need for this law stems from efforts by Clayton County officials to obstruct the opening of a state-approved charter school, preventing children from attending class and costing the schools hundreds of thousands of dollars.

I can’t remember a previous bill signing that included a costume change, but Gov. Deal donned the blazer worn by students and administrators at Clayton County’s Utopian Academy to sign the bill helping that school. 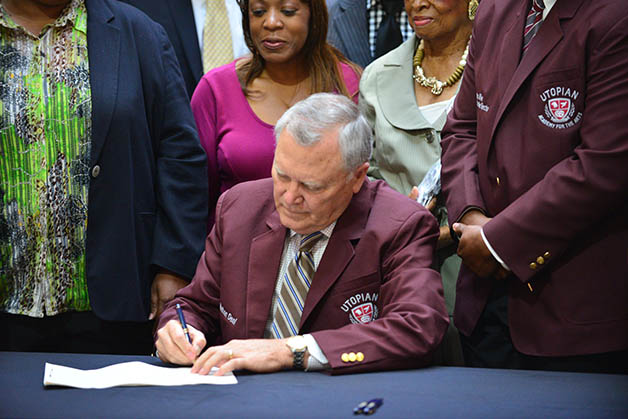 If I were a betting man, I’d wager $50 that his press people came up with the idea of putting on the blazer during the Masters.
The Governor’s signature is not required for proposed Constitutional Amendments, which require 2/3 majorities in each chamber and voter approval in a referendum.
Greg Bluestein of the AJC writes about the upcoming referendum, which will be on voters ballots for November 2016.

The governor and his allies have cast his constitutional amendment as a moral imperative. Deal said Tuesday that victims of the state’s worst schools “become the fodder of our prison system.”
Leading Democrats and some influential educators groups have staunchly opposed the plan, fearing it gives the governor’s office far too much power. DuBose Porter, who heads the Democratic Party of Georgia, said the fate of struggling schools shouldn’t rest in the hands of a governor who “has shown such a complete disregard for education and its funding.”
The plan, which passed both chambers by razor-thin margins, now hinges on a 24-word question that will be placed on ballots next year: “Shall the Constitution of Georgia be amended to allow the state to intervene in chronically failing public schools in order to improve student performance?”
Deal and his allies are already preparing what could be a multimillion-dollar campaign to push his top second-term initiative across the finish line. And critics have vowed to mount a counteroffensive.

This entry was posted in Legislation, Opportunity School District. Bookmark the permalink.