School Buses
The DeKalb County School District (DCSD) has an aging fleet of roughly 1,000 school buses. With E-SPLOST V monies, DCSD plans on spending about $30 million replacing the oldest school buses.
Earlier this month the board approved the purchase of 120 buses at a cost not to exceed $10 million. The purchase includes:

I asked Mr. Joshua Williams to tell us about the features that are requested and/or required on new school buses we purchase.

School buses are purchased similar to purchasing an automobile. There is a base price and options are added in accordance with school system requirements. DeKalb County School District orders buses with the follow-ing options/enhancements and come installed as part of the delivered vehicle:

Additionally, we use a third party installer for two components after the school buses are delivered: 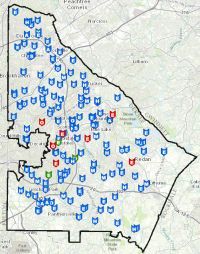