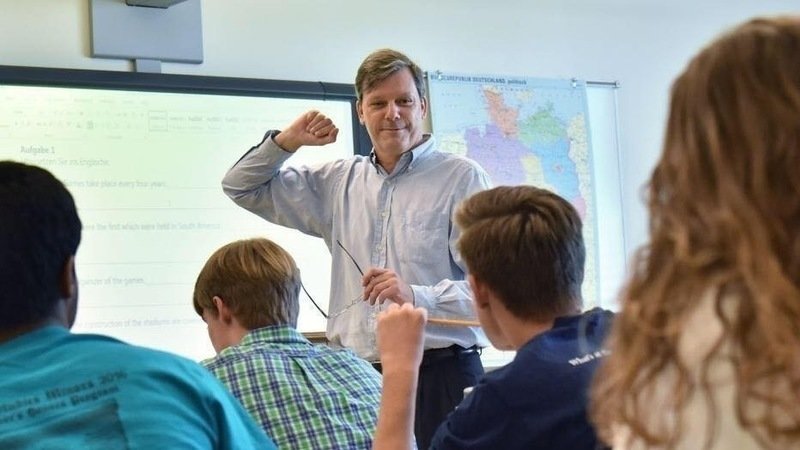 Up until just recently, Herr Uwe Neuhaus taught German at Chamblee Charter High School (CCHS). He is arguably one of the most academically effective high school German teachers in the country. According to Kavi Pandian’s open letter to Superintendent Green,

For 17 years, every AP German student has passed the exam. That’s right — out of the 562 students who have taken the AP German exam since 2000, not one has failed. Twice, he has had 100 percent of his students pass the Deutsches Sprachdiplom II, a fluency exam certifying possession of German skills advanced enough to study at a German-language university. He has been recognized by the German government as one of the top German educators in the world.

Herr Neuhaus was just reassigned to the district’s International Welcome Center where he will no longer teach German. Recently, he assigned this in class activity(Assignment Page 1 and page 2) to his students asking them to pantomime various scenes in class.

All Scenes:
* Page 1
* Page 2
Activity Assignment Excerpts
Scene 1: The Pope is standing in the shower asking for divine help. He receives a visit from a young lady who “looks after’ The Pope and satisfies his earthly needs.
Scene 3: A student was coming in after school to take a math test, and the teacher was known to the student body as “die Geile” translation “the horny” as well as for being particularly busty. As the student begins to take the test, the teacher comes from behind, puts her breasts in his face, and distracts him from the test and causes him to sweat. The teacher then massages his neck, kisses it, whispers something in his ear and runs her hands through his hair. The boy jumps up and tries to escape, but the teacher is blocking the doorway. The teacher slowly approaches the student and pushes him against the wall.
Scene 7: A boy regularly tortures animals with sadism in the bathroom of the house. He drowns a cat in a bathtub and laughs menacingly. He then throws the cat out of the window and into the street. The father walks into the bathroom and asks his son what is going on and what he did. The son explains his actions, his father reassures him, and shares that he has the same interest. They laugh and then the father slips on the wet floor and bangs his head against the sons. They both fall into the bathtub and drown.

In Defense of the Skits – Context Is Important
Dave Maxwell is an involved parent at CCHS and a parent of a student in Herr Neuhaus’ class. He echoes the hundreds of emails I have received over the last few weeks saying,

Taken out of context and in isolation, it is difficult to defend the individual skits, as Herr Neuhaus readily acknowledges. However, they were not assigned out of context or in isolation. They were assigned to a high level (beyond college level) class in which each of the students was at least a junior, had Herr Neuhaus for years, and took the class as an elective. And they were assigned the skits as part of a unit purposely designed to be provocative so that humor could be studied critically by these students.

German V Class Email
Superintendent Green was sent this open letter from many students and parents of students in that German class that received the assignment. I’ve reached out to the parents and they asked me to publish the letter as is.

Dear Dr. Green,
We write to you as the students who received the skit assignment in Herr Uwe Neuhaus’s German V class that has received so much attention. Our hope is to provide context on how our class operates and to clarify that we, as the students who actually received the assignment and interacted regularly with Herr Neuhaus, do not feel that Herr Neuhaus had any threatening, malicious, or predatory intent at all when giving us the skit assignment. We do not know what complaints you may have received, or from whom you may have received them.
We simply hope that our take on the situation, as those directly involved and affected, will convince you to immediately return Herr Neuhaus to Chamblee Charter High School, where he has worked for years and positively influenced the lives of so many students.
German V was not a first encounter with Herr Neuhaus for any of us. Most of us were students of his for the two years previous (German III+ and AP German), while the others had him as a teacher for AP German only. Regardless, we will all tell you that a hallmark of Herr Neuhaus’s classes is his creativity and dynamism in creating assignments to help his students master German. Typical activities were presentations, creative writing, and yes, skits. Only rarely was our daily class period filled with monotone grammar drills or multiple choice questions. Instead, Herr Neuhaus always sought to force us to think critically and creatively and to put our knowledge to use in the three dimensional way that true mastery of a language requires. As a result, demonstrations and skits performed for the class are something that we as a class are used to and comfortable with.
That being said, we can concur that the skits that Herr Neuhaus assigned to us on April 21st were more provocative than anything we’d received before, and consequently students expressed their discomfort with the given assignment. But while everyone seems to fixate on the content of some of the skits, we feel that the fact that Herr Neuhaus permitted us to cut or entirely rewrite scenes we were uncomfortable with acting out has been entirely omitted from the narrative. The skits were never for a grade–they were simply another challenge presented to us (in this case taken from the senior German VI class’s unit on humor) by Herr Neuhaus with the intention of improving our German while having fun. Yes, some of the skits were inappropriate.
But the fact that students felt they could tell Herr Neuhaus that they were not comfortable with his assignment, and that he then notified the entire class that it was our choice of how or if we wanted to do the skits, is much more reflective of the nature of our German class and our relationship to him than the content of the skits themselves.
We are the people who were affected by this assignment. We are the ones in the classroom everyday with Herr Neuhaus, and as a result our perspective on these skits is unique from the views of administrators, parents, or even other students of Herr Neuhaus. We are the only ones with a full understanding of the context of our class and of the assignment, and yet, we have not been given any say in how the situation was resolved or how our teacher, an engaging and exceptional educator, has been removed from his classroom. To say that we feel ignored would be an understatement. Being students, rather than parents or teachers or board members,should not diminish the stake we hold in our own education.Yet throughout this entire process, we have watched others who have no idea what our class is like intrude on the discussion with their opinions about how we felt about the situation. For the past two months, we have had no choice but to plead that the administration listen to us and realize that we understand the situation more fully than anyone else.
Hear us, listen to us, believe us.
We never wanted Herr Neuhaus removed from our school. We never felt unsafe in his classroom. Our hope is that, now that we have provided this clear statement that we want Herr Neuhaus returned to Chamblee immediately, you not only hear us, but listen and act accordingly.
Please do not write this letter off. Please believe what we have to say.
Thank you for your time and attention.
Yours,
The students of German V:
Alice Bai
Alyssa Wu
Sarah Mackey
Diana Haiden
Ellie Furr
Eric Shute
Erica Izaguirre
Hailey Maxwell
Hope Williams
Isabel Bradford
Jadé Foelske
Julia Weil
River Harper
Rohan Misra
Sarah Williams
Sonia Karsan
Theo Hardy
Teresa Maloney
Victoria Lin
Sara Lawrence
Savannah Lawrence
Marley Brock
Sifat Raihan
Giselle Washington
Chase Starks
Note:
We write you this letter as students from German V. We feel that it is important to share our unique perspective and thoughts on the situation as students, and this perspective is not shared fully by anyone. Our parents, however, stand beside us as a group one step removed from the classroom, and they have signed their names below in support of the reinstatement of Herr Neuhaus.
Parents of German V:
Dave Hardy
Jennifer Hardy
Maria Perez
Anastacio Izaguirre
Marco Foelske
Lina Karsan
Hetal Karsan
Sue Weil
Gary Weil
Melanie Furr
Mark Furr
David Maxwell
Terri Maxwell
Rahul Misra
Reena Misra
Pete Maloney
Catherine Maloney
Catherine Springer
Clark Cloyd
Eva Haiden
Karl Haiden
Anne Boyer-Shute
Randy Shute
Tracey Mackey
Bryant Mackey
Jennie Oldfield
Karyn McCrimmon
Chuck Harper
Lourelle Lawrence
Brian Lawrence
Angela Chen
Brian Lin
Jen Brock
Jonathan Brock
Hongying Zhong
Charles Bai
Daqing Wu
Xu Wang
Shefali Khatun
Md. Nazrul Islam
Keisha Starks
Veshi Starks
Blake Bradford
This entry was posted in Chamblee High School. Bookmark the permalink.