A black cheerleader was auto cropped out of a cheerleader squad picture when the photo was auto formatted from 4×6 to 4×4 for printing by an online system. Some students sprung into action blaming the cheerleader squad for racial bias. A protest for this non-event is planned for tomorrow morning and sanctioned by the school district.
See below for a first hand account of what actually happened.
I’ve pieced together the following about the incident and protest. Curiously, I’ve even found an incident where the school district very intentionally cropped out white students from a photo used in an official document. 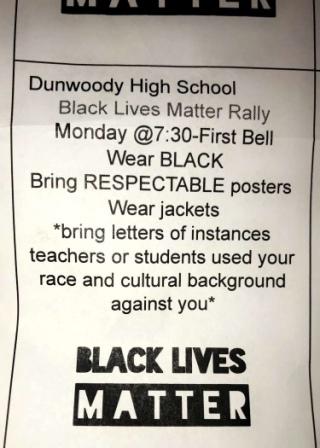 This protest is sanctioned by the school district. Message from Dunwoody High School Principal, Priscilla Cole

Parents,
In case you were not aware, there was an incident that occurred in which a viral picture went out that was mischaracterized which involved our football cheerleading squad and it has impacted our school community. The nature of this incident has led some students to exercise their right to protest and they plan to hold a peaceful protest Monday morning, December 18, 2017 from 7:30am-8:00am.
To ensure the protest is peaceful, we will have additional officers on campus as well district support. Students who are not participating in the protest should enter the school immediately upon arrival to school as they normally do. Please be mindful of the current carpool lane rules as you drop your student(s) off. Instruction will continue as planned so that students can prepare for their upcoming finals.
Lastly, please be reminded that students cannot wear any clothing that may cause a disturbance or disruption in the school. This includes, but is not limited to clothing with references to drugs and/or alcohol, confederate flags, black lives matter, white pride or power etc.
–Dunwoody HS

School District Intentionally Crops Out White Students
Back in 2013, the school district put out a 90 Day plan. I don’t think Walgreens is to blame for this one. 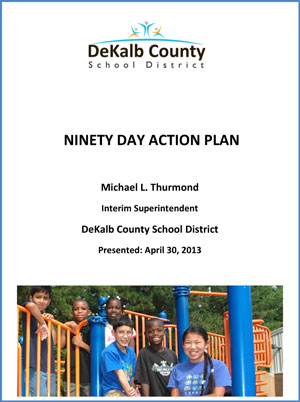 Was racism behind black cheerleader being cropped from Dunwoody High photo?
Students Kneel During National Anthem
December 18, 2017 – Students at Dunwoody High School are crying racism after a black cheerleader was cropped out of a team picture.
Social media posts popped up over the weekend showing the full photo and its edited version, which eliminated the only black member in the picture.

114 responses to “Protesting Cheerleaders at DHS – The Whole Story”