Who's Getting Redistricted Out of Lakeside High School

In addition to the proposed 750 seat addition to Lakeside HS, the school district has announced it’s intention to redistrict 250 students currently attending LHS to the new Brookhaven High School cluster. The stated reason for this potential redistricting is to alleviate the estimated overcrowding at LHS.
There are other redistricting efforts in neighboring clusters as well. Sources have indicated that school district officials may target certain elementary schools for redistricting on the basis of socio-economics and demographics.
DeKalb School District has a policy on school attendance zones – “Policy AD – School Attendance Areas“. Policy AD does not contain any considerations for demographic or socio-economic factors when proposing attendance zones or redistricting. 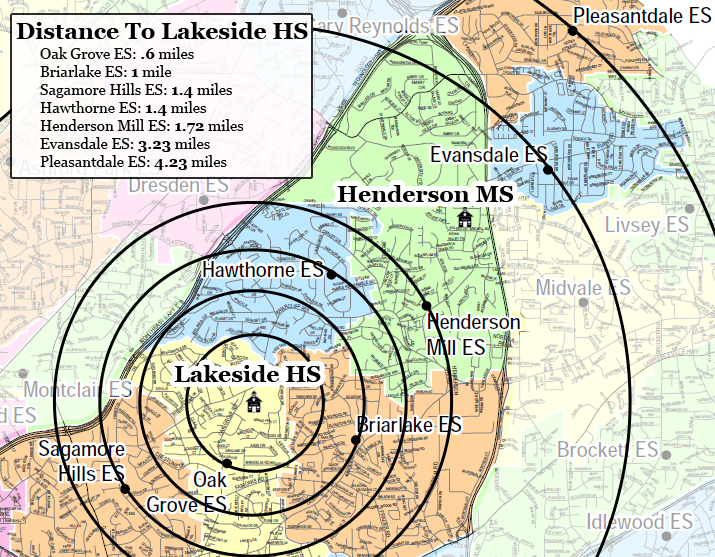 Various sources have previously indicated that the school district intended to redistrict Sagamore ES, but I have since learned that other schools are being considered in addition to Sagamore.
On November 10, Dan Drake (Director of Planning and SPLOST Programming) and Jim McMahan (Lakeside area Board of Education representative) met with Sagamore residents at Oak Grove Methodist church. At that meeting, Dan Drake set the record straight. As one of the attendees reported to me,

Mr. Drake explained that the school system had not made a determination yet about which school might be redistricted and that they had not specified Sagamore. Someone in the audience asked, “So you might move students from Oak Grove or Hawthorne instead?” To which Mr. Drake said something like “Since we don’t know where the new school will be and that decision will be made at a later date, but yes, it could be Oak Grove or Hawthorne.”

Mr. Drake’s response seems to indicated that the district intends to move an elementary school out of the Lakeside HS feeder pattern to a new Brookhaven HS.

The problem I see with redistricting Hawthorne, Oak Grove or Sagamore Hills to the new Brookhaven cluster, is that it appears to violate DSCD Policy AD.

This entry was posted in Lakeside High School, SPLOST. Bookmark the permalink.

122 responses to “Who's Getting Redistricted Out of Lakeside High School”