In August, education planning consultants for DeKalb Schools presented Round 3 Options at Clarkston and Cross Keys high schools. Following the presentation, the audience broke down into small groups and moved into classrooms where they discussed with facilitators the pros & cons of the 3 options.
The education planning consultants came away with these Key Takeaways from the August public Round 3 meetings.
•  Parents want facilities fixed – not a Band-Aid – and cost does not seem to be a major concern
•  Parents want to know specifics of who will be redistricted
•  Parents want to know impact on elementary schools
•  Traffic impact, especially pertaining to Briarcliff site, is a major concern
•  Consensus on moving magnet programs is unclear – many parents opposed to moving successful program, but others indicate support for more centralized program, or expanding magnets to more schools
•  Option C might have more support if sites are named where magnets would move
•  Concern about impact on property values and keeping communities intact
•  Concern that DCSD will work cooperatively with DeKalb/municipal governments on whatever plan is adopted
•  Some support for developing one or more new options, including rebuilding Cross Keys HS on current site
•  Overwhelming support for Option A among those who indicated a preference: 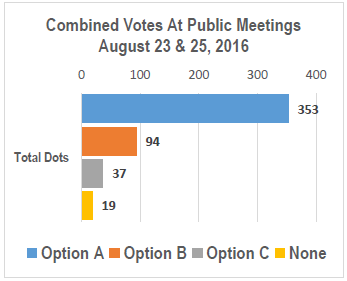