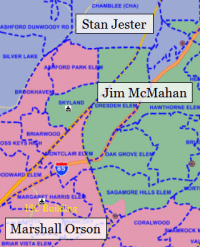 School locations and board districts

John Lewis ES – Brookhaven’s New Elementary School
Interestingly, it was done in violation of virtually every policy and regulation we have for naming schools. In particular, the board member from the district was not included on the naming committee (as called for in policy), no one from the community was on the committee (as called for in policy), and there was no research about the history of the area (as called for in the regulation). These are only three of, at least, eleven violations of policy/regulation made during this naming process.
Since the Brookhaven community and the appropriate Board members were not included in the naming process, I asked the other members of the Board of Education, “Do you believe Brookhaven would chose to name their new elementary school after John Lewis?”

I asked Commissioner Nancy Jester for her thoughts,

“That’s quite an assumption. Furthermore, it seems to imply that having another preference for a school name means that you aren’t sufficiently modern, sensitive, or respectful of Rep. Lewis. It implies that you can’t simply prefer another naming convention (location names, etc.) without being racially divisive.
In 2016, shouldn’t we simply be respectful of each individual’s preferences without trying to shame them, label them, or trivialize their worth or opinion? And in 2016, why would an elected official feel the need to identify a person as a member of a group (a community, a color, etc.) and then denigrate the group? Isn’t the idea of civil rights to acknowledge and respect the dignity and value of each individual?”
— Commissioner Nancy Jester

Recap
John Lewis is a civil rights leader leader and sitting U.S. Representative for the 5th congressional district.
Marshall Orson chaired a renaming committee consisting of 3 Latino parents and 7 administrators. They were charged with naming the ICS building which will be temporarily reconstituted to house some of the overflow from Montclair elementary. Marshall Orson asked to rename the ICS building in honor of his personal friend, sitting Congressman, John Lewis.
Furthermore, in direct conflict with at least 11 policies and regulations of the DeKalb County School District, Mr. Orson requested that when the ICS building is closed, and the new elementary school in Brookhaven opens, that the new school in Brookhaven be named after John Lewis.

Governance Issues
So why is adhereance to policy so important? Well, for one, it can affect accreditation. To use the words of Mark Elgart, CEO of AdvancED/SACS, “In 2004, this system was on probation for governance issues.” In April of 2013, Dr. Elgart visited the Board of Education and talked about the governance issues when a school district neglects its own policies.
School District Policy FDC & Policy Regulations FDC-R: Naming Facilities
Was the process in naming the new school in Brookhaven congruent with school district policy and regulations?
FDC – Unless waived by the Board, a facility may not be named for a living individual or an individual who has been deceased less than five years. John Lewis is alive and an active member of Congress
A.1 – a School Naming/Renaming Committee shall be formed consisting of at least eleven but not more than fifteen members. – The school naming committee had 10 members consisting of 3 parents and 7 administrators.
A.2 – The primary Board of Education Member shall serve as the Chair of the committee. – McMahan is the board member for the new elementary school at the Skyland location. In accordance with regulation A.2, McMahan should chair the committee charged with naming the new elementary school in Brookhaven.
A.3 – Other Board of Education Members whose district includes the school or affected schools shall serve on the committee. McMahan’s district clearly includes schools affected by the new elementary school, yet was excluded from the committee.
A.6 – The principals of the feeder schools that will be aligned with the school shall each select a parent or a student to serve on the committee. – There were only 3 parents on the committee and they were all from Montclair ES.
A.8 – Once the membership of the committee has been determined, the Chair shall submit the names of the committee members to the Board of Education. The names were not submitted to the board during the process. The names of the committee were only revealed at the board meeting where the board voted on this matter.
A.9 – The committee will meet at least three times over a four-month period. – The committee met twice.
C.2 – The top three school [names] shall be placed on a community ballot. – There was no community ballot.
C.3 – Within ten days of the committee meeting at which the community ballot was approved, the ballot shall be distributed via email to the principals of all feeder schools and any other affected schools. The email shall instruct principals to copy and distribute the community ballots to all students in their schools. A ballot was never distributed to principals and a copy never went home to any students thereby notifying the parents and community the district was planning on naming the new school in Brookhaven.

The Question
Since Brookhaven’s new Elementary School was just recently named in such a way it violated virtually every policy and regulation we have for naming schools, I asked the members of the Board of education, “Do you believe Brookhaven would chose to name their new elementary school after John Lewis?” Here are their responses from the Business Meeting discussion on John Lewis Elementary

Dr. Joyce Morley – “The elephant in the room is the fact that Brookhaven doesn’t want somebody of a different color on their school … It’s because of people with their racist attitudes and mindsets who are afraid to come and deal with it … We need to ask ourselves if it was somebody else’s name, if it was a different persuasion, would we say the same thing. As the Governor of Ohio said, No“.

Vickie Turner – “Brookhaven needs to come into this century and acknowledge John Lewis … We need to grow as people and adults. The best place to start is with our children. It’s to teach them about the historical figures in our history of color.”

Marshall Orson – “It’s apropos to name a school like this after somebody like John Lewis … What was heartening is the parent participants in this process, all of whom were Hispanic were the ones who pushed the idea for naming him.”

Dr. Michael Erwin – “Your comment was, Would Brookhaven have chosen this name if they had the ability to chose?. That is a direct slap in the face of the history of African Americans in this country. I can’t believe you let that out of your mouth.”

Jim McMahan – “I support naming Congressman John Lewis elementary school. I also support the community supporting that. I appreciate Mr. Orson’s advocacy and time spent on this, but if it is a permanent name for the permanent location, I think the challenge was that it was not asked of the permanent community.”

Stan Jester – “My only objection to this was the lack of local control and breaking rules and regulations. I’m disappointed and to some extent offended that when I asked the question, Do you believe this is the name that the Brookhaven community would chose for their elementary school? … If John Lewis is so great, I think we would all say yes. But all of a sudden everybody starts bringing race into this … black and white. I didn’t do that, y’all did that.” 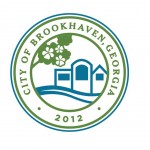 John Lewis ES
Brookhaven’s New Elementary School
July 10, 2016 – In May the DeKalb BOE announced agreements with the City of Brookhaven and the Georgia State Properties Commission to acquire 11.2 acres at Skyland Park for a new elementary school. The new school going up in Brookhaven to be named John Lewis Elementary.

This entry was posted in Board Policy, Brookhaven. Bookmark the permalink.