Posted on May 16, 2016 by Stan Jester | Comments Off on GM Plant Site Developers – Straighten Out The Facts 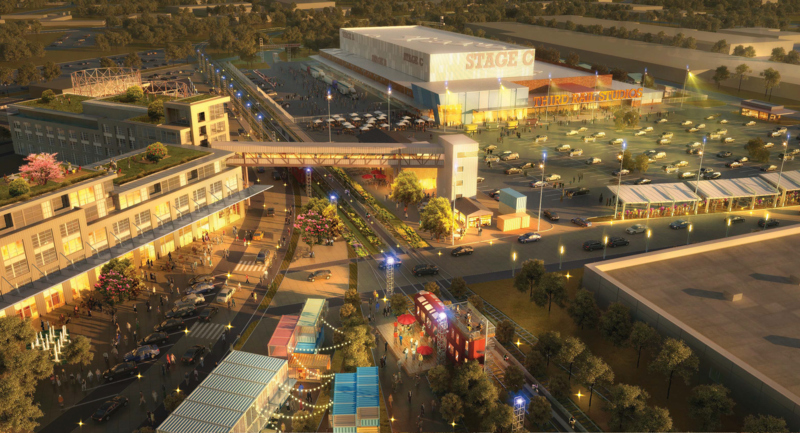 A rendering of the redevelopment at the site of the former GM plant near I-285 and I-85.
Earlier this month WABE 90.1 took a Closer Look with DeKalb School Board Chair, Dr. Melvin Johnson, at the financing of the GM Plant site.
In “TAD Talk“, Commissioner Nancy Jester characterized the interview as striking because of the blatantly false statements made by the Chair of the Board or Education and his refusal to understand the basics of school finance, how a TAD works, and the financial realities of the project.
A few days ago WABE 90.1’s Martha Dalton and Rose Scott took a Closer Look with Egbert Perry and Eric Pinckney,  developers of the Doraville GM Plant site.  Here is an excerpt:
Rose Scott (Cohost of WABE 90.1 Closer Look) – Straighten some of that out for us.  What do you think has been misrepresented?
Egbert Perry (CEO of The Integral Group) – No one is asking the school board or any other jurisdiction to fund this project.  This project was bought 100% with private dollars.  All of the vertical development, and infrastructure within the footprint of the project that is private, will be funded with private dollars.
We are asking to use a tool that has been used 10,000 times or more successfully across the country to fund public infrastructure.  That is roads, public utilities, public parks, a connection to transit.  People think the site is connected to transit.  It’s close to transit, but to get there you have to drive in a car a mile to get to it even though the transit stop is just across the tracks.
That’s what the funding is for.  It doesn’t make its way to the developer.  There’s no mechanism by which we would ever get a penny of those dollars.  That has not been made clear.  There has been a lot said to suggest that this is funding a private project or developer.  That’s not legally possible and an important clarification.
Rose Scott/Marth Dalton – I haven’t heard anyone from the school board say they have questions about where the money will go, it’s more of a question the money is coming from the school district.  Can you understand that argument?
Egbert Perry – Absolutely not.  At this time, the school board collects a few hundred thousand dollars every year from the GM site.  They have gotten that year in and year out for 8+ years the site has been sitting undeveloped.  It’s undeveloped because of the absence of public infrastructure.
What the TAD does is allow you to use your vision of what you can do with the site to fund public infrastructure using private dollars, but all of the increase in taxes that you create first go to repay for that public infrastructure that was funded.
Then the school system, the city and the county start to receive windfall profits because of new tax revenues  that have been generated by the development.  So, the development is what is generating the dollars to fund the public infrastructure.
At no time does the school board ever reach into its pockets or coffers to fund anything.  All it has is upside, it just delays how soon the upside kicks in because the infrastructure has to be funded before the nets start to flow to the district.
You can read the entire transcript here >>

DeKalb Schools – Not a Fan of the TAD
WABE 90.1 CLOSER LOOK