WABE 90.1 took a Closer Look with Dr. Melvin Johnson (interview transcribed), chair of the DeKalb Board of Education, to discuss the Doraville TAD. The FactChecker staff is very concerned about Dr. Johnson’s understanding of the Doraville TAD and how TADs work among other numerous other inaccurate statements he made in that 15 minute interview.
Related Posts And Docs

Transcribed Interview of Dr. Johnson on WABE – (May 2016)

… Excerpt …
Early in the interview, Dr. Johnson said, “all funds generated by tax dollars should go to student learning.” He went on to say, “We are judged by how we manage our funds. We are judged by the product and student outcomes.” That sounds wonderful, right?
Sadly, DeKalb Schools does not even comply with state law requiring 65% of total operating expenditures be spent on “direct classroom expenditures”. And, our weak state Department of Education hands out waivers like candy. The state legislature should really do something about that. But, I digress.
For Chairman Johnson to say “all funds…should go to student learning” is duplicitous given the fact that such a low percentage of taxpayer dollars actually make it into the classroom. Furthermore, Dr. Johnson hasn’t exactly been a faithful advocate for improving the percentage of your taxes actually going into the classroom. Nope, he and the majority, kept right on spending your money on bloating the bureaucracy. The district also has some interesting procurement habits but I’ll save that for another blog. And while they were spending all your money for the benefit of adults and not “for the children”, they accumulated a mountain of cash. As of the end of February 2016, DeKalb Schools has over $225 million in operating reserve cash. For the same period the capital fund reserve is over $260 million. With money like that, why aren’t your classrooms at half the size? Why aren’t teachers getting bigger raises? Why are your kids in trailers anywhere? Why do you have to buy toilet paper to send to your kid’s school?
If they aren’t going to spend it on the classroom, they could always give us a tax cut. DeKalb is one of only a handful of districts that can even tax over 20 mils. Right now, we’re paying 23.73 mils. Do you think that extra 3.73 mils is helping? If it was, wouldn’t we see fewer schools on the OSD list rather than the net +3 that were added as targets for state takeover? DeKalb has more schools on that list than any other district.
Continue Reading >> 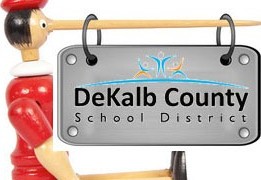 5 responses to “FactChecker Reviews Chairman Johnson on the TAD”