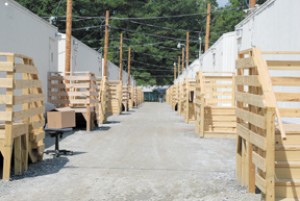 In March, the DeKalb Board of Education approved $2.5 million for the purchase of trailers. The Cross Keys redistricting plan will result in a net reduction of approximately 15 trailer classrooms in the Cross Keys Cluster.
Modular and Portable Classroom Deployment Plan
This “Modular and Portable Classroom Deployment Plan” is for the 2016-17 School Year and is subject to change based upon feedback from the Allotments Department, Principals and Regional Superintendents.
Trailer Types:

*Note: These schools were included in the Cross Keys Redistricting Plan. Staff originally estimated the possible reduction of approximately 30 modular/portable classroom units. This summer, staff will remove 15 units from these three schools, according to the administration, due to the public input regarding families who may move to alternative housing locations in order to remain within their current school’s attendance area in lieu of being redistricted.
Trailers Added
(47 singles and 3 quads) to the following school locations due to enrollment

Trailers added or removed
(21 singles and 1 restroom) due to construction activity at the following schools:

The district is in the process of disposing of/auctioning 22 singles that are beyond their useful life.

This entry was posted in Trailers. Bookmark the permalink.