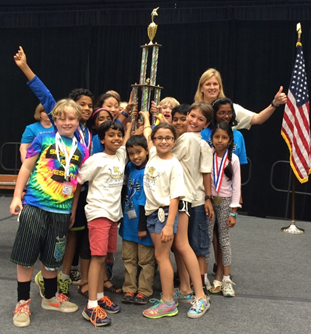 Aerodynamic paper rockets that can fly straight to a target, water rockets made from plastic bottles flying hundreds of feet in the air, and suspension bridges made out of straws and tape. These are just a few of the experiments that tested the creative and scientific skills of the more than 1,300 third, fourth, fifth and sixth graders participating in the Thirteenth Annual Science Olympiad State Tournament at Kennesaw State University on May 16.
The goal of the national Elementary Science Olympiad (ESO) program (http://soinc.org/elementary) is to improve the quality of science education through problem-based and project-based competitions. Students compete as teams against other schools in 18 different events that range the spectrum of science subjects. Furthermore, students are provided with opportunities to engage in hands-on, interactive learning opportunities in STEM. Georgia hosts one of the largest Elementary Science Olympiad competitions in the U.S. with 64 teams participating this year. These teams earned their spot in the State Finals by finishing in the top tier of their regional qualifying tournament. Over 250 Georgia teams from public, private, and home schools compete at the regional tournaments each year.
This year’s Georgia Elementary Science Olympiad State Champion is Vanderlyn Elementary School from the DeKalb County School District. Vanderlyn’s Science Olympiad team also came in first place in their regional qualifier, the DeKalb County Science Olympiad Tournament run by Fernbank Science Center on March 28, 2015.
At the Georgia ESO, each team of twenty students earns points toward their overall score by competing in 18 diverse science tests and challenges. The Vanderlyn team of 3rd, 4th and 5th graders finished in the top ten in half of the events, with first place medals in the Deep Blue Sea (oceanography), Leaf & Tree Finder, and Don’t Bug Me competitions. They also finished second in the Straw Egg Drop building event and sixth in the perennial spectator favorite, Water Rockets. The Vanderlyn team is coached by parent volunteer, Dr. Karen Baker, and teacher Kevin Hughes.