Annexation – What happens to the Property

Posted on December 16, 2014 by FactChecker | Comments Off on Annexation – What happens to the Property

QUESTION: What happens to county school district property when a city annexes an area in that county? 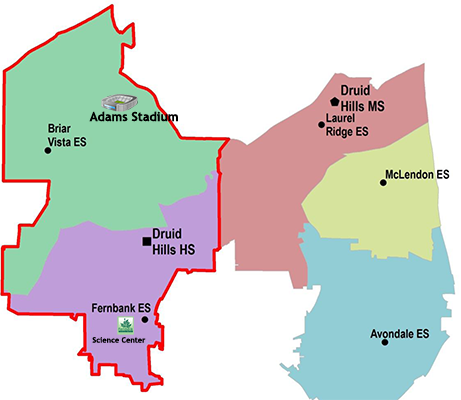 “Where a municipality is authorized by the General Assembly to create a public-school system coextensive with its corporate limits, a part or all of which territory has theretofore been included within the system of public schools operated by the county, forming a portion of a school district, the municipality succeeds to the control of educational matters and to the title to the real estate held as public-school property within its territory”

“Where the corporate limits of a municipality are extended so as to take in an area where a county school is located, the school authorities of the independent municipal system succeed to the control of all educational matters in such area and also to title to real estate held as public school property, in the absence of expressed intent on the part of the Legislature or in the absence of an agreement between the interested parties.”

ANSWER: It would appear that if Druid Hills is annexed into Atlanta Public Schools (APS), or if any new city school districts form in DeKalb, all educational matters including taxing and title to real estate held by the county are likely to move to APS or new cities respectively.

This entry was posted in Druid Hills Annexation. Bookmark the permalink.