DeKalb School Board Election Up In Air

Posted on February 21, 2014 by Stan Jester | Comments Off on DeKalb School Board Election Up In Air 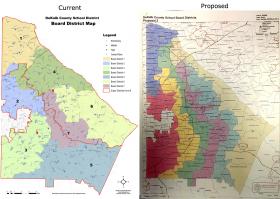 Current district lines and the latest proposal passed by the DeKalb Delegation on Thursday.

DeKalb elections chief Maxine Daniels says unless state lawmakers resolve their political differences quickly, school board elections scheduled for May will be delayed.
“We can’t make law and so unless we’re provided with some kind of guidance, some kind of law, we will not do anything,” said Daniels.

[cincopa AYDAverBpys6]
In 2011, the state passed a law shrinking DeKalb’s school board from nine seats to seven. That change is supposed to go into effect this election year, but an updated district map still isn’t ready. Members of DeKalb’s legislative delegation and school board have butted heads over the issue since the 2011 law was passed.
Daniels says her office needs clarity on the new map by March 3, the qualifying day for school board candidates.
“If nothing is resolved between now and qualifying, then at that point in March, we won’t be able to qualify anybody and so we know that will go to court and we’ll just depend on the court to straighten it all out,” said Daniels.
To avoid that scenario, Rep. Mike Jacobs, R – Brookhaven, is sponsoring House Bill 979, which would keep the district lines the same, and simply eliminate the two at-large members.
On the House floor Thursday, Jacobs said it was urgent House members vote for his bill. He pointed to the fact no alternative proposal had been offered by the Democratically-controlled DeKalb delegation and warned there was only four more days until Crossover Day, the deadline in which legislation must pass at least one chamber to remain alive.
“Stability is key for keeping the progress of this board of education. By keeping these seven seats intact, this bill provides stability,” said Jacobs.
In response, the leader of the DeKalb delegation, Democrat Howard Mosby, called for more time and insisted the issue should be decided locally, not by the full House. He downplayed Jacobs’ sense of urgency.
“There are a lot of politics around this and so we want to be thoughtful in this process and we want the delegation to take the time to make this right,” said Mosby.
Jacobs’ bill ultimately passed 111-60 and is now headed to the Senate.
Hours after the vote, the DeKalb delegation released its proposed map.
It immediately troubled Maxine Daniels, DeKalb’s elections chief.
“We’re talking about wholesale changes in the district lines. That is a very elaborate process for us and it opens us up to errors,” said Daniels.
She said Jacobs’ bill is more practical at this late stage and said the Democrats’ proposal would be an extreme challenge.

This entry was posted in Board Rep Elections, DeKalb County School District. Bookmark the permalink.